Another early Sunday ride and another frost with temperature around freezing.
Got to meeting point in Waikanae just before 9am ready to go. Had expected a few people to be there but only Russell was there so at 9.05  we decided to head off.
Met two other bikes at Kimberly road in Levin only to find Lex had a dead battery on his Honda VFR. Had already phoned local bike shop who came out with a new battery! ( Great service for a Sunday Morning)..   New battery fitted and off to Shannon to pick up rest of the riders and grab a quick hot coffee.
Sun out and cold but warming up nice and quickly.

Roads were quite good but some shaded areas needed to be treated with respect. Thought to Ashhurst noticed the Manawatu Gorge is closed again , people in Ashhurst must be fed up with all extra traffic they have to put up with.

Through Ashhurst and over the river to Pohangina Valley East Rd. Bit of a regroup to let faster riders go first.  Great scenery makes me realise how lucky we are to be living in such a great place.

Arrived at Apiti Pub for lunch, the fire was roaring which was a nice welcome after a chilly ride. Had a great lunch ,great venison burgers which was locally sourced !! 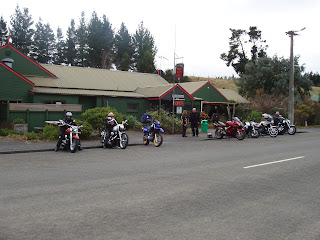 Upon arrival we found Lex had a flat tyre on the rear of his Honda..  We could not find an obvious hole so pumped a gas cylinder into the tyre to see where it was leaking . Found a hole and used a Sticky String from the puncture repair kit I carry to plug it. Pumped tyre up with another couple of cylinders ,  the landlord of the pub pointed us down the road to a local contractor who had a compressor, Knock on his door he said he's a good joker !!!.
Anyway he let us use his compressor and we found another hole, so another string plug pumped her up and we hit the road. 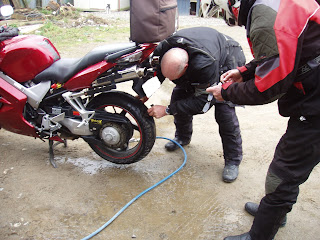 Uneventful ride home and plugs held up fine on the Honda.
A good day out with a great lunch and a great group of people :-)